We’re sitting in the garden of the Kleftiko Music Bar and Happy Snak Café. Most people just call it the Klef. It’s a nothing little bar in a fading resort called Pilafkos. Thirty years ago Pilafkos didn’t even exist. It was built on land owned by farmers and shepherds who gladly sold up for a slice of the new tourist pie.  Some farmers and shepherds got very rich indeed. Some never really got the hang of the whole 1980s’ thing at all.

Not so many tourists come to Pilafkos these days. Even less come to the Klef. The bar is too far from the beach and shopping arcades to be convenient. Nikos the owner blames the lack of passing trade on the surrounding hotel compounds. He says their all-inclusive meal deals and evening entertainment shows have killed his business. Whatever. Personally I attribute his lack of passing trade to the fact that Nikos himself is a swingeing, screeching screwball who couldn’t run a fucking bar if his mother’s life depended on it. Which it does. After eleven years it’s now looking pretty certain that she’ll never get a new hip. Or even an eye test. She doesn’t complain. She dotes on Nikos. She will dote on Nikos until the day she dies. Such is Greece.

It’s a beautiful afternoon. Sometimes in August it can be too hot to breathe but towards the end of the season the white heat always turns to the deepest blue. In two weeks Pilafkos will close down for the winter. Bars, shops, restaurants and hotels will all shut for six months. The beach apartments will be boarded up. The rental cars will be mothballed. The glass-bottomed tourist boats will head for dry dock. Nothing will stir. Only the bakery at the top of the hill will stay open. As far as we know Pilafkos has only two permanent residents. One is this weird little guy with bandy legs who looks like he ran away from the circus to look after all the stray cats in a deserted holiday resort on a Greek island. The other is Nikos who lives in the family apartment over the Klef.

In a few days Nikos would normally close the bar and retire upstairs to watch American pornography and English football. Every year he spends a fortune buying tat and memorabilia on-line to hang behind the bar. He thinks it makes the tourists feel at home. No one really knows what else Nikos actually does for six months of the year. Many bar owners travel to India or Thailand or even Northern Europe for a break but Nikos never ventures far. Every year he travels to the mainland for some industry convention. Last year he returned with a stack of flat-screen TVs and an automated sound system. The year before it was an air hockey table and a vibrating armchair. The year before that it was a giant plastic elephant for the kids to climb. The elephant still stands outside the Klef as some huge tawdry monument to moronic graffiti. This infuriates Nikos but he won’t pay to get the elephant repainted. He was recently telling me that he was going to install a CCTV system instead to catch the culprits who return every season to add new tags and slogans in the middle of the night. Tagging the elephant has turned into a popular Pilafkos sport.

“Why don’t you just charge them to write on the elephant?”

Nikos looked mortified. “Who am I, my friend? I am not a fucking pirate! Let them write. I will shoot them.”

This winter, however, everything is going to be different for all of us.

It is undeniably another quiet afternoon at the Klef. My wife and I are sitting at a table in the garden watching Nikos behind the bar. No one is saying very much. There is no traffic. There is no passing trade. Nikos looks furious. I suppose this is understandable. He’s probably not used to being handcuffed to his own bar wearing a waistcoat made of shitty Greek explosives. To be honest I have no idea whether they are shitty explosives or not, but I bought them from a night fisherman who spends his days drinking Ouzo in the sun so I’m not holding my breath. For all I know they might do little more than knock an ice cube off a cocktail or they might obliterate Pilafkos altogether. I’m not an expert on these things. I only really strapped them around Nikos to make a point.

We sip our beers in silence. Kat has that look on her face that suggests I might have gone too far.

“Handcuffs?” she says eventually. “Where the fuck did you get the handcuffs from?”

“The fisherman,” I reply.

“Why would a pissed up fisherman own a pair of handcuffs, for Christ’s sake?”

“He told me he uses them to hit the fish over the head when they land in his nets.”

“And you believed him?”

“This is Greece, Kat, so yes … I believed him. How else would you stun a fish?”

She arches an eyebrow.

“A rock? A stone? An oar? I don’t know. Jesus, Cal, I wouldn’t use handcuffs to even restrain a fucking fish! And why didn’t you tell me you were going to handcuff Nikos to his own bar and then blow him up?”

We argue like children. We have always argued like children. The very first time I met Kat we argued like two small kids about Debbie Harry, or something, and then made out in the shower. I only argue with people I actually like.

The sun is beginning to go down behind the giant yellow elephant outside. Shadows grow longer by the minute. Daylight is turning to gold. We both reach for our sunglasses at the same time. Kat always looks so cool wearing her shades. Like some motorcycle gypsy assassin or something. I just look like the guy from the bakery. Even with our shades on, however, the sun is still bright enough to make us squint. I guess it won’t be long now. They’ll come out of the sun while it’s low and still alive. They’ll always come out of the sun. It’s classic entry-level combat cover.

I guess I always knew I’d eventually get caught. To believe I could escape undetected and see out my days wandering the beach wearing a crumpled white linen suit and sneakers would undoubtedly be a massive vanity. There are, after all, fourteen bodies buried up in the mountains. Six, eight, ten… I can’t quite remember. I just know it was very important at the time to have an even tally. That’s why I stopped. I’m not an addict or anything. Addicts can’t stop. It’s just that I have always been unsettled by odd numbers. I like my numbers to be complete. Odd numbers just look unfinished. I was born in 1963 and just look at how that year panned out for mankind.

It’s a whole different world up there in the mountains. The villages never sold out. There are no water parks or cocktail bars, no bungee cranes or rental cars. Crazy old folk live in crumbling white cottages with lame dogs and shotguns. Toothless old men drive toothless old machinery to the markets and festivals. You can buy enough honey and fruit to last a week for the price of a beer in Pilafkos. The mountain villages are both devout and godless. Ornate shrines for the dead decorate the roadside. Candles in these shrines are constantly kept alive by old women wearing the black of the bereaved. There are bandit laws for bandit souls and these are seldom broken. At night it is so black you can drive by starlight. Log fires burn in every taverna. Faded photographs hang from every wall. It’s a dark and enchanting neverland for the foolish and fearless alike. Only a fool would choose to live in the mountains. Only the fearless survive. A part of me always wanted to rent a cabin up there for the winter. Just to see what would happen.

Nikos is clearly wrestling with an obvious dilemma. On the one hand he is chained to his own bar and is in imminent danger of exploding all over the place. On the other hand it looks as if Olympiakos are going to stuff his beloved Liverpool F.C. for some sort of championship. This would be a miracle indeed. I realise he’s torn between the TV screen above the bar and doubts concerning his own mortality but I wish he would just stop rattling the handcuffs. It’s futile and inconsiderate. I consider switching off the game just to save all our sanities but I admit I’m a little intrigued.

Kat lights another cigarette and exhales like a movie star.

“Do you think the police will be here soon?” she says.

In fact I know the police are already here because I can see them. It would appear that every policeman on the island is here. And the army. The police are standing in groups around their Citroen squad cars parked across the one main road leading out of the resort. Eventually the road beyond the Klef starts to disintegrate and soon disappears altogether. Beyond the rows of shabby, half-built holiday villas there is nothing except scorched shrub land and jagged granite rocks. Effectively the police have blocked off Pilafkos by parking badly.

The army arrived a while ago in a couple of old German trucks. I saw them up at the top of Bakery Hill. The trucks crawled down into town and now there are soldiers hiding behind the bushes which surround the Klef. They are perfectly still and silent. This alone suggests that they are not conscripts. The kids on National Service would all be posting siege videos to the internet by now. These guys are shapeless and patient. They are simply waiting for the order to shoot. I’m not particularly worried because I am not armed. It’s unlikely that the Greek army would open fire on a defenceless man and his wife sitting in a bar. This is not West London.

I can see two marksmen on the roof of the apartment block over the road. They are staring down the scopes of their rifles which are permanently trained on our table. Both marksmen are wearing full combat kit. It must be really uncomfortable up there.

I finish the last of my beer and gather up my cigarettes and wallet.

“Right then,” I say in a voice which I hope sounds both confident and defiant. “We should probably leave now.”

As I push back my chair and stand up three totally unexpected things happen almost simultaneously. They happen so fast that my brain barely has time to register anything before it is too late. The first thing to happen is that Liverpool score a goal. This in itself is not entirely unexpected but it came from out of nowhere nonetheless. Nikos cannot contain himself. He hurls himself towards the TV screen cheering with shock and delight. As a result a fairly hefty explosion rocks the Klef. The blast is loud enough to make Kat and I instinctively duck for cover and knocks the air from our lungs. Shattered glass rains down everywhere as thick white smoke billows across the bar. We can hear the explosion rolling around Pilafkos. As the noise and smoke begin to clear we straighten up and survey the damage. Remarkably the TV screen is undamaged. Liverpool are still celebrating. Nikos is nowhere to be seen. He has simply disappeared. The only trace and clue he leaves behind is an arm. It is still handcuffed to the bar. At least Nikos died happy.

The third and probably most unexpected thing to happen is that some damn fool then shoots Kat in the head. She drops like a brick at my feet. 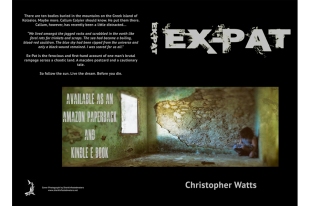 Ex-Pat is available now as an Amazon paperback.