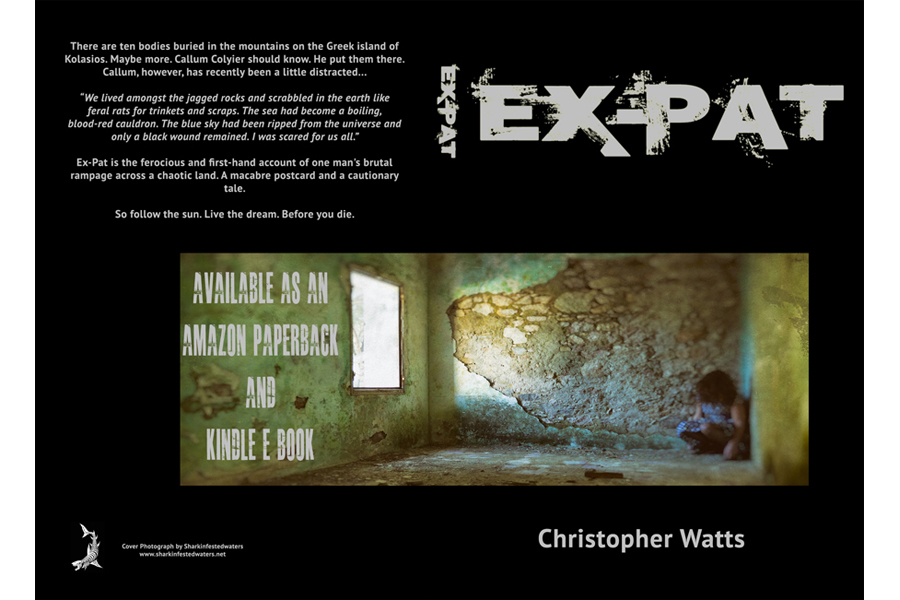 To believe I could escape undetected and see out my days wandering the beach wearing a crumpled white linen suit and sneakers would undoubtedly be a massive vanity. There are, after all, fourteen bodies buried up in the mountains. Six, eight, ten… I can’t quite remember. I just know it was very important at the time to have an even tally. That’s why I stopped. I’m not an addict or anything. Addicts can’t stop. It’s just that I have always been unsettled by odd numbers. I like my numbers to be complete. Odd numbers just look unfinished. I was born in 1963 and look at how that year panned out for mankind.

It was a whole different world up there in the mountains. The villages never sold out. There were no water parks or cocktail bars, no bungee cranes or rental cars. Crazy old folk lived in crumbling white cottages with lame dogs and shotguns. Toothless old men drove toothless old machinery to the markets and festivals. The mountain villages were both devout and godless. Ornate shrines for the dead dotted the roadside. Candles in these shrines were constantly kept alive by old women wearing the black of the bereaved. There were bandit laws for bandit souls and those were seldom broken. At night it was so black that you could drive by starlight. Log fires burned in every taverna. Faded photographs hung from every wall. It was a dark and enchanting never-land for the foolish and fearless alike. Only a fool would choose to live in the mountains. Only the fearless survived. A part of me had always wanted to rent a cabin up there for the winter. Just to see what would happen.

Jimmy was a pensioner and a pest and a joker and a cripple. He only drank in bars with the prettiest staff. At the end of every evening he would insist they danced with him to some slow smooch on the radio so that he could touch them up. The bar staff were too polite to refuse or complain. He bought them Alco pops and gave them sweets he fished out of his musty pockets. Everybody laughed at Jimmy. He was a character. He was a lascivious old frog with oily hair and dandruff. He used his disability to bully and intimidate. He figured that no one would hit an old man who had to use a stick just to get to the toilet. The stick gave Jimmy a license to grope and leer and harass any female within his reach. The ex-pats thought Jimmy was hilarious. He was deemed harmless and rather salty. He would invite himself to a table and regale everybody with a stream of smutty blue jokes and revel in the embarrassment of his audience. Jimmy barely concealed his bile and ignorance behind the jokes. It was the comedy of petty hate. Jimmy always insisted it was just banter. Just end-of-the-pier kind of stuff. He meant no harm.

“Except the fucking blacks!” he snorted. The ex-pats all laughed.

He was a sour old man. He was Jimmy the Stick. He was a cunt.

Jimmy lived alone in one of the white houses up the road. He had never married. As far as anyone knew he had no family. He had a small pension which funded his retirement and he seemed to do no more than hobble through the local bars seeking out an audience to humiliate. He once referred to Kat as his “little German cockatoo” because she had red hair.  He flapped his elbows and clucked like a chicken. Everybody laughed. So Kat stood up without a word, picked up Jimmy’s stick and threw it into the sea. He was furious. He limped outside and hid behind a bush. He waited for an hour in that bush just so that he could shout abuse at Kat as we left the bar. We both laughed. Someone retrieved Jimmy’s stick from the surf. We heard no more about the matter and Jimmy never said another word to either Kat or I. There was no love lost.

I was sitting in Billy’s bar on the sea front one night. I was alone and flicking through an old English newspaper that somebody had left behind. There was a new barmaid working in Billy’s. She was eastern European. Her name was Lena. She was very beautiful and a little nervous. Jimmy the Stick was soon pestering her with a barrage of innuendo. Billy himself was chuckling at Lena’s discomfort and this only encouraged Jimmy.

He stuck his fist through his flies and waved at Lena. She blushed. I felt sorry for her. Jimmy picked up his beers. He winked at the barmaid and limped back to a table of ex-pats in the corner. Everybody laughed.

It was a quiet night in Haraklos. I smoked a cigarette on the promenade and waited for Jimmy the Stick. Eventually he emerged from Billy’s bar and struggled over the road to his little blue hatchback. He was whistling an old cockney tune. I waited for him to unlock the car before approaching. He was surprised to see me. His milky eyes narrowed imperceptibly. I punched him once in the throat before he could say anything. He hit the tarmac like a sack of mud.

Jimmy the Stick was a heavy bastard. It took a lot of effort to heave him into the boot. I picked up the keys and set off towards the mountains. After a few kilometres there was a lot of angry banging and thumping from the boot. The noise began to get on my nerves. So I pulled over, checked the road, opened the boot and punched Jimmy once again. He fell silent. I tied his hands and feet with plastic cable grips and continued my journey.

The mountains were dark and silent. I parked near the hole I had dug for Jimmy the Stick. It was a large, deep hole. I bundled the old man out of the boot of the car and left him wheezing and gasping on the ground. I dragged a heavy wooden crate out of the undergrowth and gently nudged it down into the hole. Then I pulled the old man over to the hole by his feet and rolled him into the crate. He was fighting for air. He was pathetic.

I tossed Jimmy’s stick into the crate before securing the lid with a hammer and several heavy nails. The crate was bucking and jumping in the hole as Jimmy tried to kick himself free. It was pointless. I walked back to the car and fetched my bag. Carefully I unwrapped the road flare I had bought that morning from a chandler in Kolasios Town.  I unscrewed the plastic cap at one end, tapped the ignition flint against the cap and stuffed the blazing tube into the crate through a hole I had drilled in the lid. Smoke and sparks poured from the hole.  I could hear the flare fizzing and popping inside the crate. I peered into the hole and watched the sulphurous orange light burn brightly. It was like a window into hell. There was no sound from the old man. After fifteen minutes the flare expired. I shovelled earth over the crate, smoothed over the surface and then drove to Jimmy’s house. I parked the car in the driveway, pocketed his papers and left the keys in the ignition. Then I walked back across the fields to our little cottage in Haraklos by the light of the stars.

Ex-Pat by Christopher Watts is now available as an Amazon paperback & e-book.