You can grow old in an armchair if there’s nothing else to do. You can grow old in SoHo or Sarajevo, in a submarine or in a rocket ship. Because we’re never really alone. It’s now easier than ever to log on and drop out. It’s almost compulsory. Except that we know it’s all bullshit. We didn’t really mean to click on everybody’s underwhelming photographs of the super-moon or their lazy-eyed progeny. It was just an involuntary mouse-twitch. A mwitch. We actually meant to start a revolution. But, hey, tick-fucking-tock and all that. Tomorrow. It’s definitely gonna happen tomorrow. 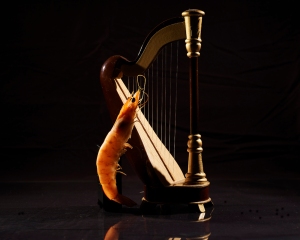 We’ve recently been thinking about food. Food and Instagram. Food and Instagram and America. In that order. Specifically we’ve been thinking about food photography and that Holy Grail – the Pink Lady Awards. Last year we were short-listed and commended for a photograph of a prawn playing a harp. This year we’re somehow gonna nail that sucker. And we’re not going to photograph any food whatsoever. We’re going to leave all that to the Instagrammers and Pinheads. Instead we’re going to photograph kitchens.

The true stars of food photography are those furthest from the camera. The true stars are those people who grow, nurture, harvest, sell, distribute, buy, wash, prep and cook the food which ultimately arrives on our plates. To simply grab a snap of your dinner on a mobile phone and instantly share it with the world seems a little churlish. As if you exercised one single muscle in its creation? As if you need to prove that you still possess the basic motor skills required to hold a knife and fork? Food photography has become a modern obsession alongside prefixing everything with the word alt and worshipping the shamen gods of over-priced coffee.

The true stars of food photography understand that this desire to share our every morsel on social media is a luxury which the hungry cannot afford. If you’re hungry then you’re not too particular about what you eat. You’re even less likely to give a damn whether the food is colour co-ordinated for extra sensory pleasure or sculpted into a scale model of the Matrix Vault.

The ability to create and cook a dish is a far greater skill than the ability to photograph it. Professional food photographers would be nowhere without the talented chefs and kitchen assistants who can turn potatoes into gold. Food photography – just like cooking – can be intricate and time-consuming. Assuming that a Smartphone app can conveniently side-step those intricacies is a stupid notion. The only reason to photograph food in a public place is if you later plan to use those images as evidence in a court of law. If not then put the phone back in your pocket and eat your fucking meal before it gets cold.

And then there’s America. Land of the free. Team America. Here to save the mother-fucking world. Going to hell in a big bucket of brain-death. On the bright side, however, it makes the English look slightly less stupid. So have hope. Or just fuck off.